5.1 earthquake shakes the Coffee Axis in Colombia, inhabitants felt the tremor in various parts of the country, they do not report damages or victims, reported the news portal of pulzo.

The first report from the authorities of the Colombian Geological Service establishes that the magnitude of the earthquake was 4.8 degrees, around 2:57 in the morning of this Wednesday, January 27.

However, this report was modified and expanded the power of the earthquake in 5.1 with an epicenter in the municipality of La Victoria, in Valle del Cauca, the alert was issued to the authorities who immediately toured the designated areas.

Even the Manizales fire department issued a report in which no news was presented until then in the Caldas capital.

The earthquake in Colombia was so powerful that it was felt in municipalities such as Cali, Manizales, Armenia, Pereira and Medellín, and their respective departments.

In addition, the report of the inhabitants through social networks indicates that the earthquake was felt in Bogotá and surrounding regions, which generated concern among them to know if there were victims of the natural phenomenon.

This earthquake occurs two days after the 22nd anniversary of the Eje Cafetero earthquake, which severely damaged Armenia, in this natural phenomenon 1,185 deaths were registered, according to official figures.

The Civil Protection authorities continued this morning in a recount of damages in the areas that reported that they felt the tremor. However, until now, everything remained apparently calm, while a tour was made of the places where the earthquake struck in Colombia. 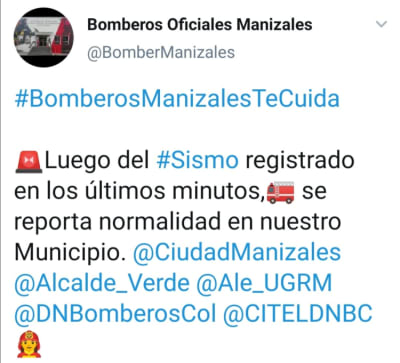 On the page of Blue Radio A video recorded by a citizen was published that recorded the exact moment when the earthquake in Colombia was felt.

The video began to circulate on the Twitter account of @ AlejoMarin204 and indicates that his awakening this Wednesday, January 27, was unusual.

In the images you can see a room that moves in a worrying way, in addition to some medals hanging on the wall that shudder,

According to the Civil Protection authorities, fortunately in the preliminary report there are no victims or significant damages.

However, they were alert to possible aftershocks, in order to make the alert report in time and thus avoid damage and injuries.

Despite the power of the earthquake that was felt in Colombia, so far the report indicates that there are no people injured or severe damage to buildings and routes in the coffee country. 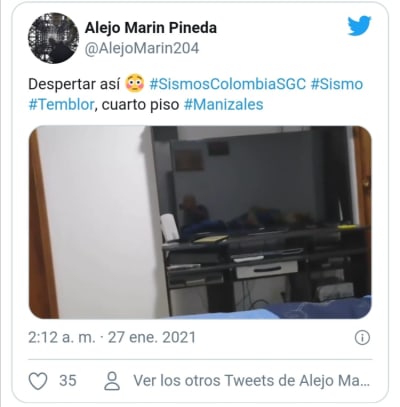 MundoHispánico has 8 million followers on Facebook who interact with all its platforms, with breaking news and live video coverage of the main events of national importance.