About 4 million people in California affected by the pandemic would benefit from a check for $ 600 to be issued in the coming weeks, including undocumented families, Governor Gavin Newsom reported.

The Golden State Stimulus is a one-time payment that would be received by state residents with an annual income of $ 30,000 or less.

“Low-income families have been disproportionately affected by this pandemic,” Newsom said in a TikTok video.

“That is why we recently announced a new stimulus. We refer to it as the Golden State Incentive, ”Newsom added.

California’s stimulus packages would match the $ 600 federal stimulus, providing more than $ 1,200 to some Californians who receive both checks, Newsom said. Patch.

The state-tailored stimulus was part of a $ 5 billion “Immediate Action Package” that was included in Newsom’s proposed state budget, which was projected to be the most expensive budget in state history.

The $ 2.4 billion plan would put the checks into the hands of all 2019 taxpayers who received a California Earned Income Tax Credit in 2020, as well as those who are eligible to receive the state credit in 2021, according to the state documents.

California will issue a check for $ 600 and undocumented are eligible. Photo: Shutterstock

This means that state stimulus payments could get into the hands of those who did not receive a federal stimulus and would help “undocumented households who file taxes with an Individual Taxpayer Identification Number (ITIN, on their own), including parents with US citizen children, ”according to a statement from Newsom’s office on January 6.

“In these darkest times of the COVID-19 pandemic, this budget will help Californians with urgent action to address our immediate challenges and build toward our recovery,” Newsom wrote in a statement in early January.

Hundreds of migrant workers lined up this week during a harvest break to receive the coronavirus vaccine at a vineyard in Southern California. 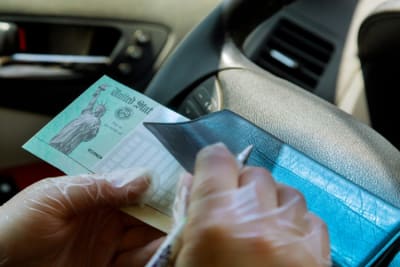 California will issue a check for $ 600 and undocumented are eligible. Photo: Shutterstock

Inoculated farmworkers are among the vulnerable immigrants in the United States, particularly the 11 million who do not have a residence permit and who activists say may be some of the most difficult to reach during the largest vaccination campaign in the history of the United States. country.

Some unauthorized immigrants fear that information collected during vaccination could be turned over to authorities and therefore may not seek inoculation, while those who speak little or no English may find it difficult to access doses. Like other groups, some are hesitant about the fact that the vaccine is recently approved, and language barriers could also make it difficult to get messages to counter misinformation.

Filed Under: California Will Issue $ 600 Check And Undocumented Are Eligible

While these difficulties could exist for many vulnerable groups of immigrants, they are particularly concerning for those of Latino origin, who make up a large portion of the workforce in industries where they face a high risk of exposure to the coronavirus.

“There is anxiety and it is real … but so is the fear of dying from COVID-19,” said Pablo Alvarado, director of the National Day Laborer Organizing Network, a group that watches over their well-being.

To address these challenges, organizations that support Latino immigrants are going to farm fields to bring vaccines and information to migrant workers and try to counter misinformation in Spanish and other languages.

Filed Under: California Will Issue $ 600 Check And Undocumented Are Eligible