It was through his account Twitter, that Fernando shared sad news, where he mentions the sensitive loss of his mother, with an emotional farewell message, accompanied by a series of images.

“She is my mother, the legendary Lupe Vázquez. Today he left to meet on that plane of the cosmos with his parents, his loves, and those affections that advanced him. Actress, comedian, composer, writer, teacher ”, that’s how he said goodbye to his mother.

Also in your account Instagram He left a very emotional farewell: “For many it was Miss Lupita, and she marked their lives by showing them the world in their early years. For others it was the legendary Lupe Vázquez, from the Mexican Bar and Cabaret Theater and Paula Cecilia Guadalupe y Anexas in Cándido Pérez, ”.

And he added: “actress, comedian, writer, composer and one of the best improvisers on the Mexican scene. For me and my brother Balam was our mother, a fantastic, incomparable and irreplaceable woman. “ 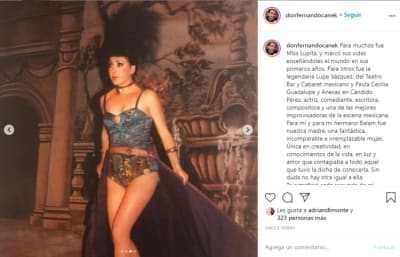 And he concluded: “I will miss you every second of my existence, and I will be grateful for every moment that life gave me by your side in 32 years. It was a privilege to be your son, and I hope I have honored you as my mother. I am your make, your design. I have only eternal love and gratitude for and for you. I love you”

The actress had a long career in Mexican television, highlighting her participation in the programs “Until death do us part”, “My dear Isabel”, “The little VIP school”, “Locura de Amor”, according to The universal

One of his last projects was in the novel “Los güeros also we are nacos”, starring the first actress Lorena Velázquez.

Great celebrities said goodbye to the late actress Lupe Vázquez, after learning the sad news, shared by her son Fernando Canek, they also took the opportunity to send their condolences.

One of those who mourned the loss was his former partner Jorge Ortiz de Pinedo, who worked for many years alongside Lupe Vázquez as she was known. 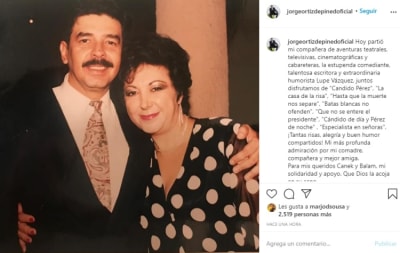 “Today my companion of theatrical, television, cinematographic and cabaret adventures left, the wonderful comedian, talented writer and extraordinary comedian Lupe Vázquez,” said the comedian in his account of Instagram.

“So much laughter, joy and good humor shared! My deepest admiration for my comadre, companion and best friend. To my dear Canek and Balam, my solidarity and support. May God welcome her into his bosom. “

Even the Association of Theater Critics and Journalists sent their message of support and condolences to the entire family of the actress: “The ACPT regrets the departure of Lupe Vázquez, comedian, writer and composer, actress on television, theater and a great reference in cabaret . We join in the grief that his family and friends suffer ”.

Also several Internet users could not believe the news of the death of Lupe Vázquez: “Oh no, what a great loss I will always have a memory of” Paula “by Cándido Pérez, I loved her character.”, Mentioned a follower. 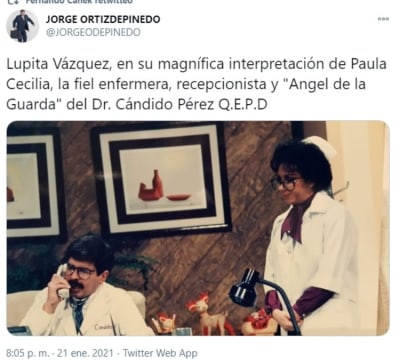 Some sent their message of support: “My sincerest condolences, Jorge. What sad news for all of us who live and work with her. Rest in Peace, dear and admired Lupita. “

Friends of the Mexican were sad: “My deepest condolences I had the opportunity to treat and beautiful person.”

“Extraordinary actress of television, theater and cabaret. Memorable figure. Endearing. Full of talent. My affection to your children Balam and Fernando Canek, and my admiration for her: grace in shoes, with all its meanings. Doña Lupe is an astronaut. ”, Was another comment.