After finishing his presidential term and leaving the White House, how much will President Donald Trump receive in pension?

President Donald Trump today handed over the reins of the United States to his successor, Democrat Joe Biden, who defeated him in the last elections.

However, as of noon today, like all previous presidents, Trump is entitled to some benefits, including a pension of $ 221,400 a year.

Still, Trump may lose those benefits if he were found guilty in the next impeachment trial.

In reality, the law withdraws the pension from presidents who have been removed from office for an accusation. That is not the case with Trump, who ended his term. Although, if found guilty, the Senate could also vote to stop granting him his pension and benefits for having served as president, explained the law professor at the University of North Carolina, Michael Gerhardt, to CNN Business.

How much will Trump receive in pension after leaving the White House?

One of the benefits for a former president is health insurance, for which Trump does not qualify as he must serve at least five years in federal office.

The country also grants funds for travel, an office and the salary of the personnel who work with it, which can reach one million dollars in a year.

It ends up being a large sum of money for taxpayers. The National Taxpayers Union Foundation explained, for example, that office rental expenses have no limits.

Last year, Bill Clinton, George W. Bush, and Barack Obama each had more than $ 500,000 for office rentals. Jimmy Carter, on the other hand, was only using $ 118,000, said Demian Brady, director of research for the agency that controls government spending.

The law that contemplates the payment of pensions to the presidents was enacted in 1958, after former President Harry Truman went through a bad economic situation. Recently, Republicans have tried to limit those spending. In 2016, there was an attempt to set presidents’ pensions at $ 200,000 and limit other expenses per president to $ 200,000 a year. Obama vetoed the legislation. In 2019, there was another attempt approved in the Lower House, but that was never voted on in the Senate.

Still, President Trump does not seem to be urging that money. During his tenure, he parted with the $ 400,000 a year he received as salary. Instead, he returned it to various government departments.

Before leaving the White House, the former president of the United States, Donald Trump, left a letter to his successor Joe Biden, according to the News portal. USA Today.

It was Judd Deere, the spokesman for the official residence, who confirmed that Trump did comply with this kind of tradition, since ex-presidents usually leave a note of congratulations and support for his successor in the Oval Office.

It was also reported that Vice President Mike Pence left a note for his successor, now Vice President Kamala Harris, according to the same news portal.

However, the White House authorities did not disclose the content of the letter that Donald Trump left for Joe Biden.

In addition, Melania Trump left a “brief welcome note” for Jill Biden, a source familiar with the matter revealed to CNN. It is unclear where he left it or its exact content.

It should be remembered that, in the message that George W. Bush left to his successor Barack Obama, he warned him that there would be “difficult moments”, that his critics would “enrage”, that his “friends would disappoint him.” But, Bush wrote, “you will have an Almighty God to comfort you, a family that loves you, and a country that is pulling for you, including me.”

Then Obama followed suit with Donald Trump, reminding the Republican in a note that presidents are “only temporary” occupants of the West Wing.

“That makes us guardians of those democratic institutions and traditions, such as the rule of law, the separation of powers, equal protection and civil liberties, for which our ancestors fought and bled to death.”

Donald Trump said goodbye to Washington on Wednesday but also hinted to return, despite a legacy of chaos, tumult and bitter divisions in the country he ruled for four years.

“Goodbye. We love you, ”Trump told supporters at Edwards Air Force Base in Maryland before boarding the presidential plane bound for Florida. “We will return in some form.”

Trump leaves office as the only president to have faced two political trials and with millions more unemployed than when he was inaugurated and 400,000 dead from the pandemic. Under his guidance, the Republicans lost the presidency and both houses of Congress. He will be forever remembered for inciting a riot, two weeks before the arrival of Democrat Joe Biden to the White House, in riots that left five dead on Capitol Hill, including a police officer from the complex.

The first president in modern history to boycott his successor’s inauguration, Trump remains enraged by his defeat and maintains that the election won by Biden was stolen from him. Republican officials in several crucial states, members of their own administrations, and numerous judges, including those appointed by Trump, have rejected those arguments.

Trump refused to participate in any of the symbolic baton-giving traditions surrounding the peaceful transition of power, including inviting Joe and Jill Biden to the White House for a visit.

It followed at least one tradition: The White House said Trump left a note for Biden. A Trump spokesman, Judd Deere, declined to reveal the content of the note or describe the sentiment expressed, arguing for privacy between presidents. 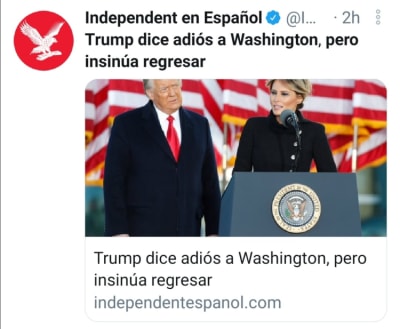 Filed as: How much will Trump receive in pension after leaving the White House?