He President Joe Biden signs his first decrees on immigration and pandemic, and fulfilled his electoral promise to present a comprehensive immigration bill on his first day in office, which includes a path to citizenship for some 11 million undocumented in the country.

The Democrat sends this bill to Congress today, as part of his commitment to “modernize” the immigration system, dubbed the “US Citizenship Act of 2021.”

The initiative, which must receive the approval of both legislative chambers, dominated by Democrats, aims to administer and protect the border in a “responsible manner”, keep “families and communities safe and better manage migration throughout the Hemisphere,” he said. a statement.

If approved, Biden’s bill would represent the largest immigration reform since the government of Republican Ronald Reagan (1981-1989), which legalized three million undocumented immigrants in 1986. 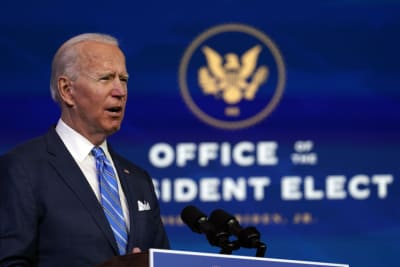 Not surprisingly, and as its name suggests, its key point is to offer a path to citizenship in eight years to the eleven million undocumented immigrants estimated to live in the United States.

Immigrants will be able to obtain a temporary legal status that will give them the option of obtaining a residence permit (“green card” or green card) five years later, if they meet a series of requirements such as having no criminal record and paying their taxes.

But an important group of them, the minors who arrived in the country as children at the hands of their parents, also undocumented and known as “dreamers”, as well as those protected by the Temporary Protected Status (TPS), mostly Central Americans, and immigrant farm workers will be able to aspire to legal residency “immediately” and three years later to citizenship, the note noted.

To prevent a flood of immigrants, the bill states that this measure would affect immigrants who are “physically present in the United States on or before January 1, 2021.”

Those deported during the Trump presidency, since January 20, 2017, and who were physically present for at least three years before the expulsion can request the same benefit for “family unity and other humanitarian purposes”, but that process will depend on of the Department of Homeland Security (DHS), for which Biden has nominated Cuban-American Alejandro Mayorkas.

In his confirmation hearing before the Senate on Monday, Mayorkas pointed out that citizenship will be granted to “individuals who have been in the country for many years, who have contributed to our communities and the economic prosperity of the nation.”

Democratic Senator Bob Menendez announced this Wednesday that he will lead the legislative effort in the Upper House for the approval of this bill and will present it to his colleagues to achieve a “just, humane and functional” immigration system.

“The last four years have been traumatic for immigrant communities that have suffered relentless attacks from the Trump Administration. Today, we turn the page on this dark chapter in our history and begin the hard work of repairing the damage and rebuilding a better union that reflects the values ​​of our nation, ”he said.

And it has a complicated mission to convince at least 10 Republican senators to move forward, since the support of at least 60 is needed and the lower house is divided into 50 congressmen from each party.

In the lower house, the bill will be sponsored by Hispanic congresswoman Linda Sánchez, who said in a tweet that too much has been waited for this reform, so she does not plan to waste time to get “down to work” to get it.

From “foreigner” to “non-citizen”

One of the modifications included in the Biden initiative is semantic, but it includes a long-standing request from organizations and activists in favor of immigrants, who have expressed their displeasure that this community is linked with terms such as “foreigner illegal”.

“The bill recognizes the United States as a nation of immigrants by changing the word ‘foreigner’ to ‘non-citizen’ in our immigration laws,” the statement said.

Another of the aspirations of the law will be family reunification, giving special importance to LGBTQ + family groups and also allowing immigrants with approved requests for family sponsorship to reunite with their loved ones in the United States temporarily while they wait for the green cards.

The bill also includes a provision that prohibits “discrimination based on religion and limits the presidential authority to issue future bans” and increases diversity visas from 55,000 to 80,000.

Among other controversial decisions, Trump established as soon as he arrived at the White House an immigration veto to the nationals of eleven countries with a significant Muslim population (Eritrea, Iran, Kyrgyzstan, Libya, Myanmar, Nigeria, Somalia, Sudan, Syria, Tanzania and Yemen) and that includes restrictions for Venezuela and North Korea.

To try to achieve the necessary Republican support in the Senate, Biden also included new resources on the border, his decision to put aside the construction of the wall on the border with Mexico – the electoral promise half fulfilled by Trump – and bet above all on the “technology” to accelerate the detection of the illegal crossing of goods and narcotics.

The new proposal also intends to allocate funds to improve the “professionalism” of border agents and create a committee to investigate possible “misconduct”, and seeks to improve the care of individuals, families and minors under the custody of the Customs Office and Border Protection (CBP).