After being accused of belonging to a criminal gang, Mexican influencer Camila Ruiz was arrested in the state of Puebla, Mexico, for allegedly stealing a car with violence in Monterrey, according to Process.

According to the General Coordination of Apprehensions of the State Investigation Agency, the 22-year-old girl was involved in an alleged theft of a vehicle, for which she has already been arrested.

Camila Ruiz is originally from the state of Puebla, where she was arrested on December 17, and they also arrested other young people, who were engaged in crime, according to The Narco Blog.

PAID WITH CHECKS WITHOUT FUNDS

The young influencer bought and paid vehicles with bad checks, to later take them to Puebla and thus carry out false procedures and resell the cars she moved, according to the authorities’ version.

They showed the sellers false identifications, so in that way they could steal many vehicles, it is worth mentioning that she was not the one arrested.

Despite the fact that on the day of her arrest Camila deleted her Instagram account, this Tuesday the 22-year-old woman went viral, and appeared again on social networks.

The Nuevo León State Investigation Agency, who participated with the Puebla State Attorney General’s Office, in order to find the criminals, who were located in the state of Puebla.

Nuevo León authorities reported that there are at least nine fraud files from this criminal gang, including when Badyr bought an Avalanche truck with a check for the amount of 299 thousand pesos, but it had no funds.

Influencer Camila Ruiz arrested. There was a complaint filed on November 20, 2019, where they mention that the victim announced the sale of his car, which was a 2009 Mercedes Benz C-350, the young woman immediately contacted him.

Camila Ruiz and her accomplice Roberto, agreed with the buyer to be able to meet in a place in Monterrey, there the man showed all the papers of the vehicle and they were in order. 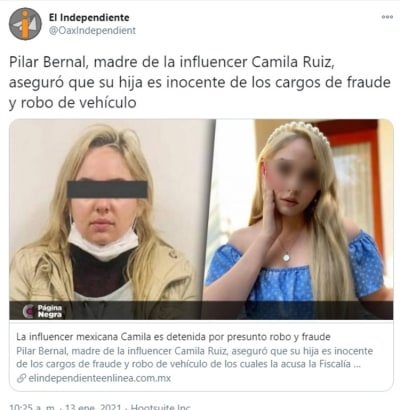 The companion of the influencer, Roberto entered to see the car from the inside, and while there he asked the seller for the keys to be able to do a test of how it works while driving.

The victim refused to lend him the keys, so the criminal snatched them from him, and asked Ruiz to get up immediately, starting immediately and running over the young man who prevented his means of transportation from being stolen.

The criminals moved to Puebla, but the authorities located them and were arrested and transferred to the city of Monterrey, where Camila was admitted to the Center for Women’s Social Reintegration.

Through social networks, several Internet users began to comment on the publications about the news of the arrest of the Mexican, since she was a celebrity on her Instagram account, with more than 200 thousand followers. 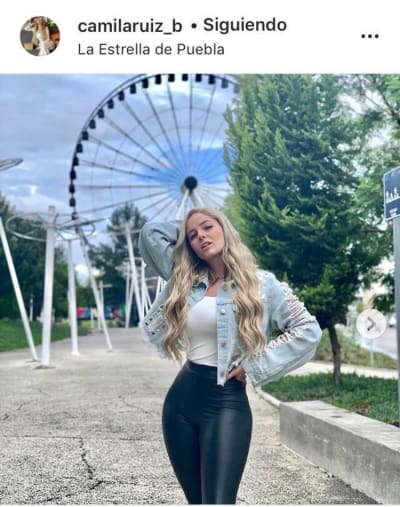 There were those who said that the woman was very pretty: “AND IT LOOKS SO GOOD”, so they replied: “For people like you, society is upside down. To be guided by the “good” is what is today, although in the head you have sh …, the “important” is to look “good”.

“All the matter of purchase and sale and checking of papers, is done within the bank branch of the seller, in cash or cashier’s check. The car is checked and tested, without the papers in the parking lot of a shopping center, you will have the ticket in your pocket. “, Said one user.