In accordance with UnivisionThere are currently 1,969 Los Angeles Sheriff’s Department employees under coronavirus quarantine, which could represent a security risk in the most populous county in the United States.

According to the Spanish-language news network, of the nearly 2,000 county officers, 1,275 are part of the assets that patrol the streets of Los Angeles County.

Los Angeles becomes the epicenter of the pandemic

Meanwhile, Los Angeles County hospitals are running out of “dangerously low levels of oxygen tanks,” and other supplies to fight the coronavirus pandemic.

Patients are already beginning to wait in ambulances before being admitted to specialized care centers, the Los Angeles newspaper reported on Friday. Times.

In addition, residents woke up this Christmas to the news of a hospital crisis due to the unprecedented escalation of coronavirus infections, which maintains the capacity of intensive care units at 0%, according to the Efe news agency. 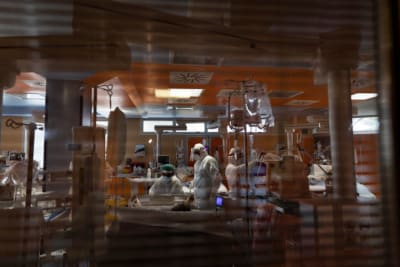 “Los Angeles hospitals are running dangerously low on their oxygen supplies,” a person familiar with the matter told the newspaper. Patients would be waiting up to eight hours in ambulances before being allowed to enter the emergency room, it adds.

This Thursday, Los Angeles County, the most populous in the country and the current focus of the pandemic in the country, registered 148 deaths from COVID-19 in a single day, the highest number since the health emergency began.