Prince William death dog. Through your account Instagram Prince William and his wife Kate Middleton announced the sad news that their dog Lupo had passed away this weekend.

The Duke and Duchess of Cambridge published the photo of their deceased pet Lupo where they left a sad farewell message for who they considered a member of the family.

“Very sadly, last weekend our beloved dog, Lupo, passed away. He has been in the heart of our family for the last nine years and we will miss him very much ”, thus they said goodbye to Lupo.

LUPO WAS AN ENGLISH COCKER SPANIEL

Lupo, the duke and duchess’s pet, was a black English cocker spaniel who joined the royal family in 2011 for a Christmas, according to the portal Page Six.

Not only Prince William and his wife were the only ones to say goodbye to the dog, also James Middleton, Kate’s brother, left a message on social networks. 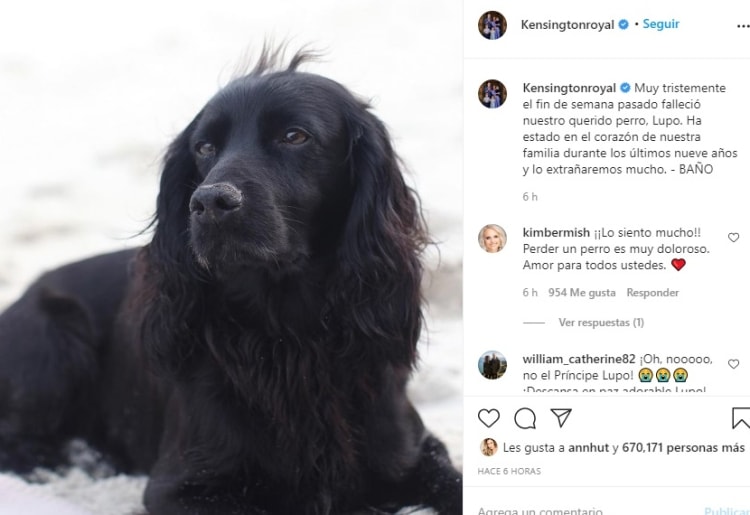 “It is with great sadness that Lupo, the beloved dog of my sister Catherine and her family, has passed away. Lupo was the son of Ella, brother of Zulu, Inka & Luna. I was 9 years old, ”was James’s message.

“I’m sorry!! Losing a dog is very painful. Love to all of you ”,“ Oh nooooo, not Prince Lupo! Rest in peace adorable Lupo! We will miss you ”,“ Oh my heart! I’m so sorry for your loss. Dogs are the most precious creatures “,” I remember well the photos of such happy and radiant newlyweds with their new puppy “, were some of the comments that several followers made in the published image.