I had the opportunity to test the new Triangles and Mini Triangles and in short, Nanoleaf has outdone itself once again. The new Shapes Triangles are an update to the company’s original triangle-shaped Light Panels, but with the new connector that makes them interoperable with other Shapes panels, such as the Hexagon lights released earlier this year.

Mini Triangles, on the other hand, are a smaller option that are also more affordable. Someone who wants to get into Nanoleaf without spending a ton of money will appreciate the new Mini Triangles, plus they work with other Shapes panels, which means you can expand them later if you want. Plus, the Minis’ unique size makes them a great option to fit into a desk or other space that might not have room for a full set of Nanoleaf Shapes panels.

Since the new Mini Triangles and Triangles are so similar to the Hexagon of Shapes, I won’t spend too much time on panels. In addition to the triangular shape, you can expect nearly identical installation processes, wall mounting steps, and more.

Like the Hexagons, the two new triangle shaped panels offer a snap-on piece to the bottom of the panel, connection ports on all sides (the Triangles actually have two on each side, allowing for some more exclusive connections). sensitivity to touch and more.

If you’re looking for more details on these things specifically, check out my overview of Hexagons, almost all of which should apply to new panels.

Working very well together, except for a few hiccups 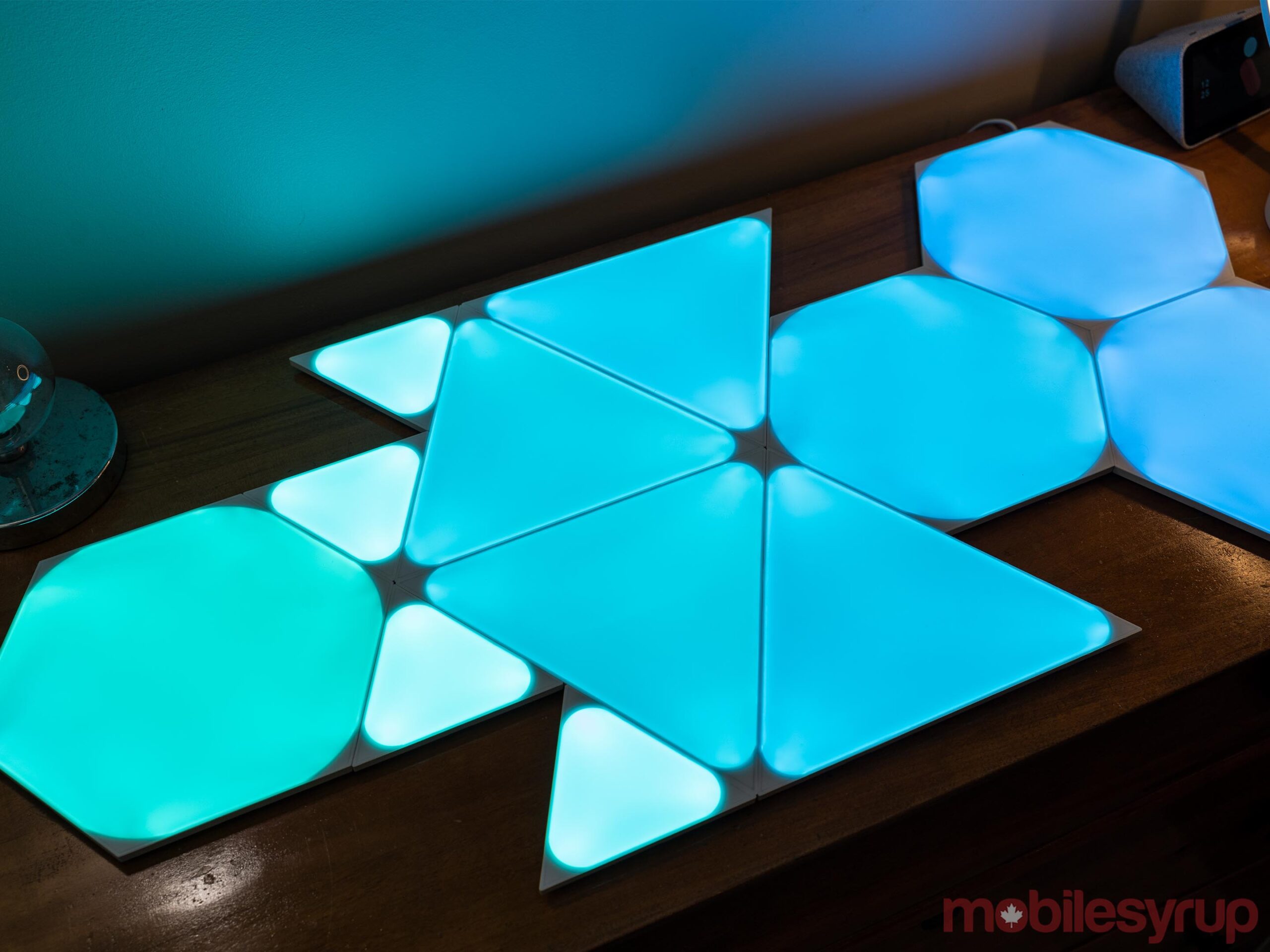 The setup process for both Triangles and Mini Triangles should be familiar to anyone who has tried other Nanoleaf panels. For those who haven’t, it’s as simple as using the Nanoleaf app and scanning a QR code on the instruction booklet that comes with the lights (there are other options too, like NFC, but I haven’t been able to get those that work properly. reliable in my tests). Another thing worth noting here is that the panels themselves do not connect to the app, but rather the control bar with the touch buttons.

This is important to keep in mind, as if you choose to mix and match panels, you will need to connect using the QR code of the connection bar you used, not the panel set. Each panel set comes with its own bar, but you only need one bar per set of lights.

Those who already have Shapes panels will have it easier if they just want to expand their existing settings. This is the route I took as I currently have limited space to use these smart light panels and as I am in the process of moving I did not want to go through the steps to mount the panels on a wall only to flip. and remove them in the next few weeks. Also, I wanted to see for myself how well the new Triangles work with the existing Hexagon panels. 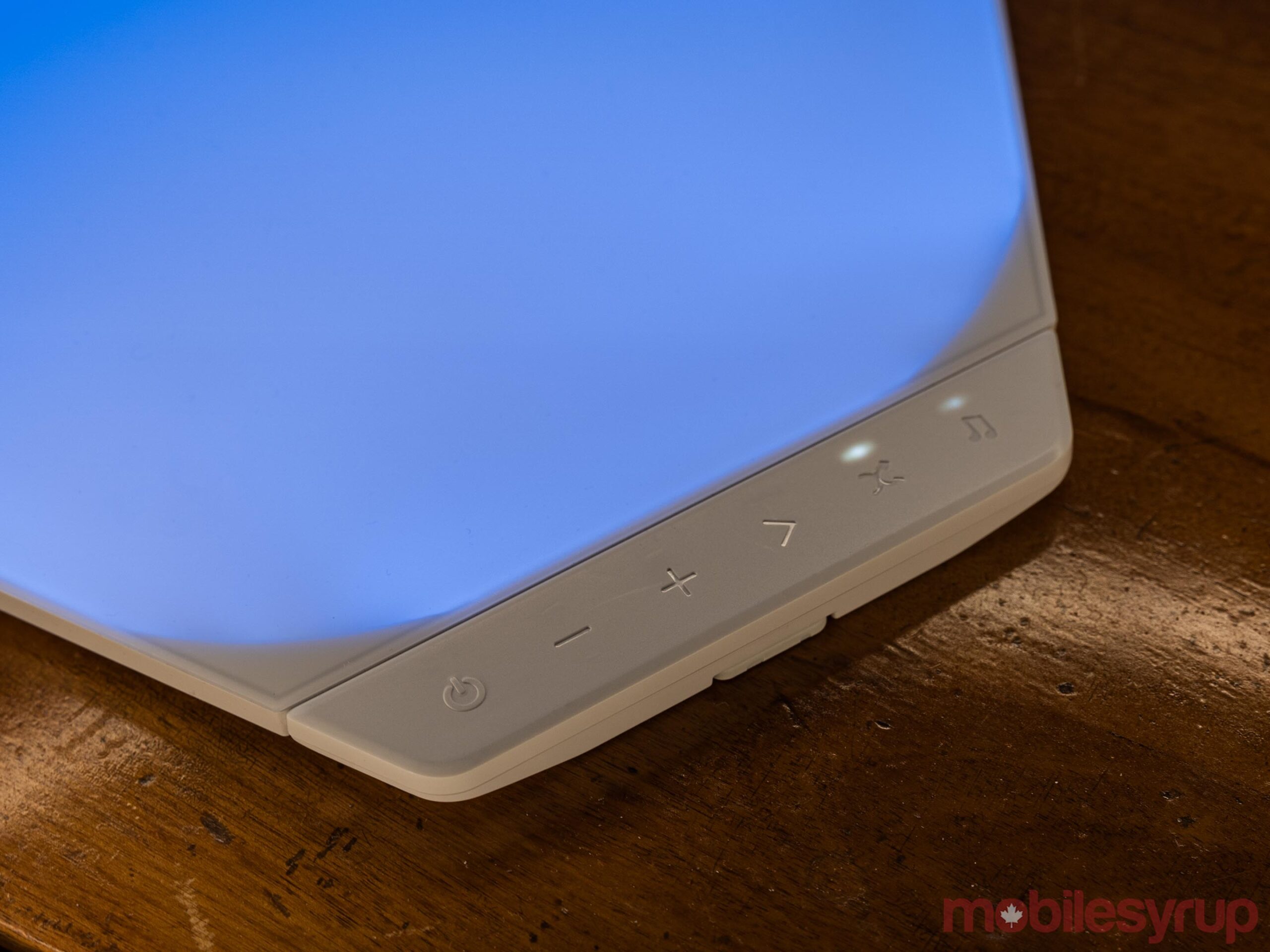 The biggest problem I ran into connecting Triangles, Mini Triangles, and Hexagons was that I had to remove and then add my Hexagons back in the Nanoleaf app. However, I suspect this may have been caused by switching to the beta app. When I tested the lights, I had to switch to the beta version of the Nanoleaf app as the stable version was not updated to work with the new forms. Since then, the update for the stable application came out, which could solve these problems.

Alternatively it could have been a mix up on my part as I switched phones for a review I am working on. In my experience, the Nanoleaf app doesn’t support cross-device use, a niche problem for someone like me who checks phones for a living, but not a problem that most people will experience.

Another little oddity I noticed is that some colors seem to be a bit brighter on the smaller Mini Triangles than on any of the larger Shapes panels. It’s not very noticeable and I don’t think I would have seen it if I weren’t trying to take pictures of the panels, but to the additional observer the difference can be annoying.

I contacted Nanoleaf to see if the difference in brightness was intentional. Perhaps a software update could balance the brightness levels on the connected panels and fix the problem.

Still, none of these things are a deal breaker and could perhaps be avoided entirely by not mixing and matching the panels. However, it’s a bit of a hassle, as the main selling point of the Shapes line is its interoperability. 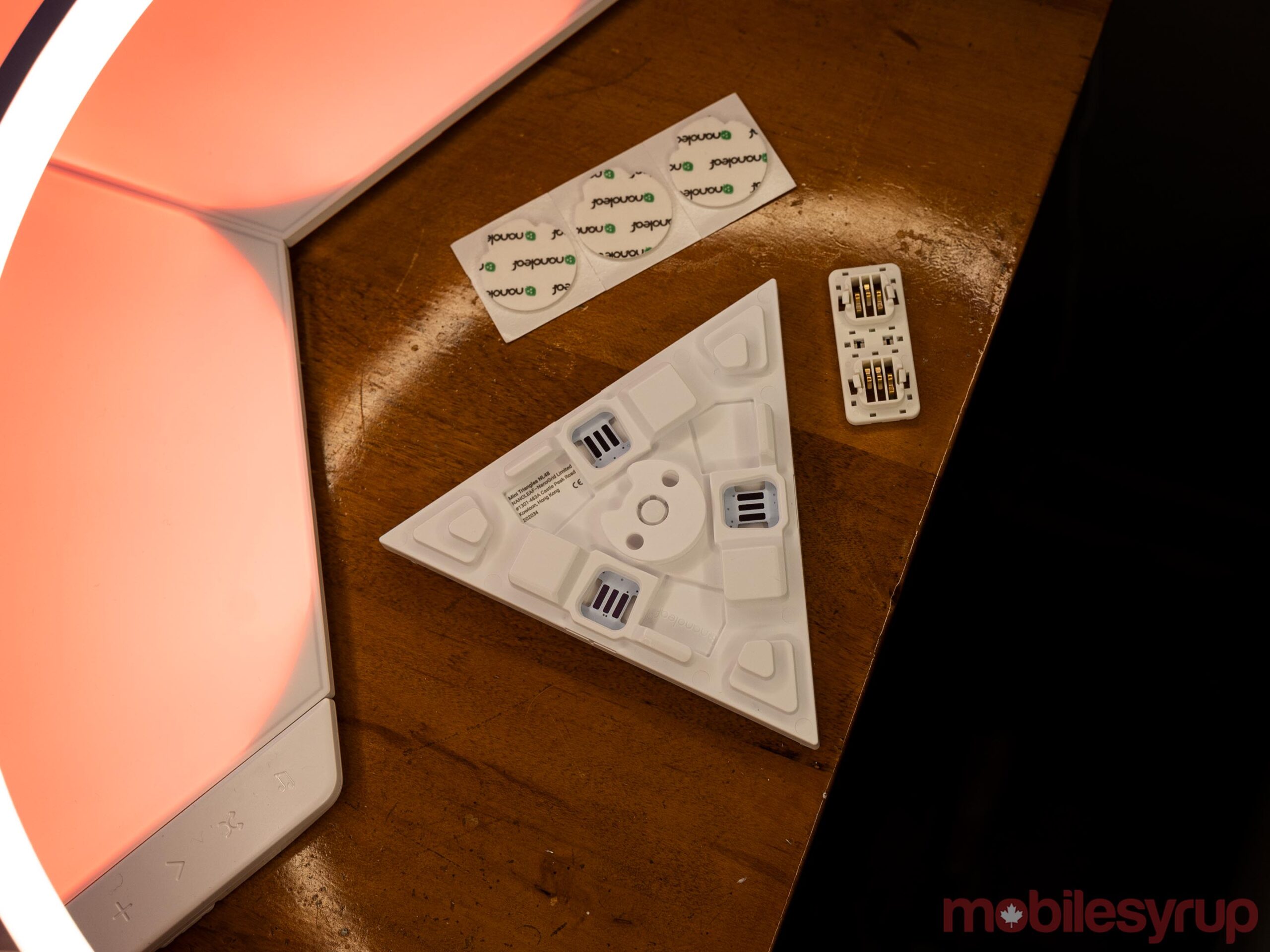 The other major change to Nanoleaf is its smartphone app, which now has a new look (and dark mode 🙌) along with a few other new features.

Besides dark mode support, the best part of the new Nanoleaf app is its updated dashboard. Instead of swiping left and right between screens for each set of connected Nanoleaf panels, the dashboard displays a list of ‘Rooms’ and the panels in those Rooms. From this screen, users can quickly turn off entire rooms, adjust the brightness of the panels in those rooms, or turn off individual sets if a room has multiple panels.

To access a specific panel group, users can press and hold to open it. The new control menu for panel groups makes it easy to change colors or scenes on the fly. There is also an easily accessible favorite option that allows users to save their preferred colors and scenes. You can also create ‘Playlists’ now that alternate between different colors and scenes if you want to change things up throughout the day. 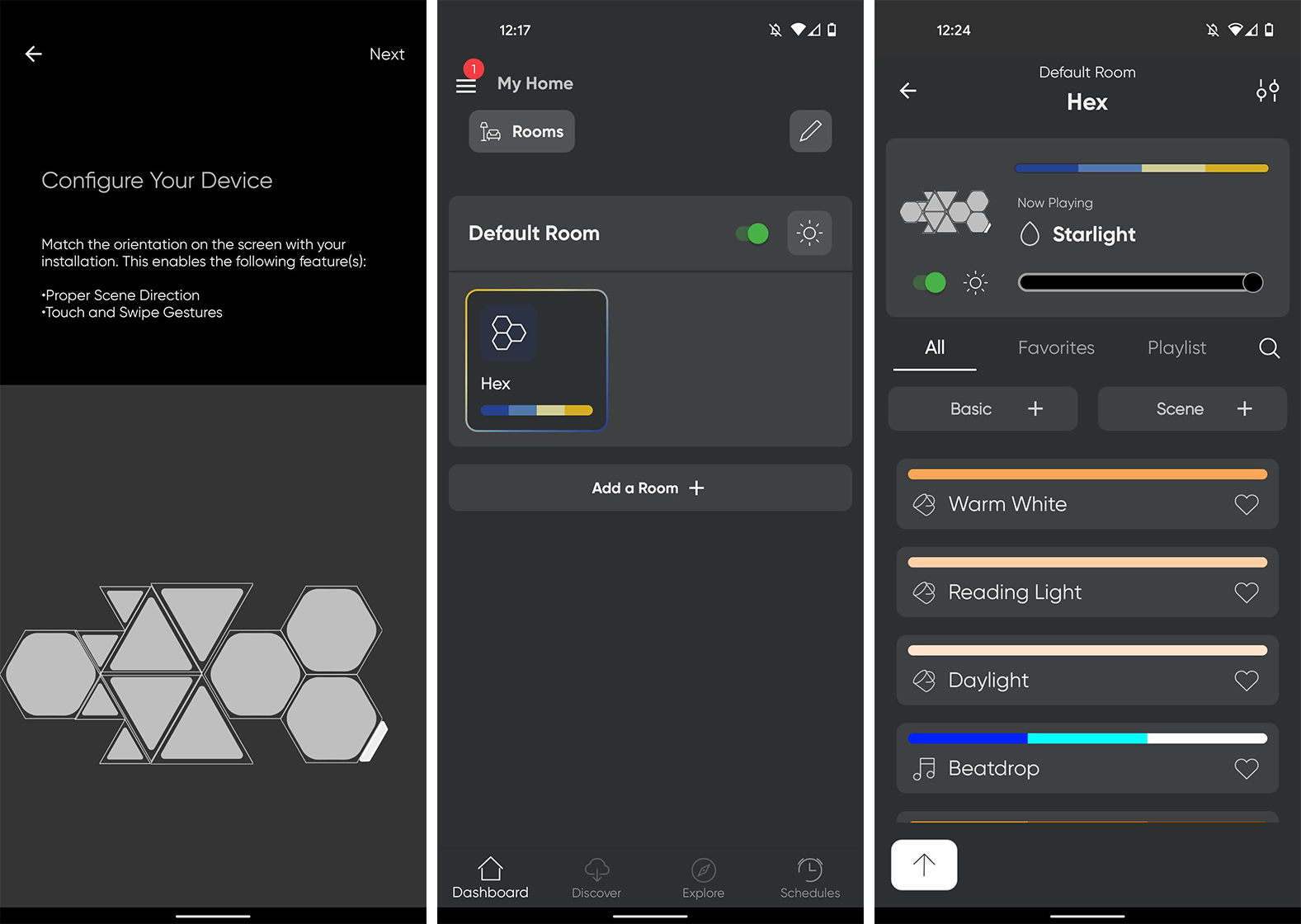 The rest of the Nanoleaf app is very similar. The ‘Discover’ tab provides quick access for people to download new scenes and playlists. ‘Explore’ provides several resources to help you learn more about Nanoleaf products and features. Explore can also help teach people how to integrate Nanoleaf products with Google Assistant, Amazon Alexa, and other smart services. It’s worth noting that I control Nanoleaf products almost exclusively through the Google Assistant and by extension Google Home, as it keeps all my smart home stuff in one place. That said, the Nanoleaf app offers a lot more options when it comes to controlling panels.

Finally, the last tab allows users to create schedules for their Nanoleaf lights so they can turn on, off, change colors, and more at different times. All in all, it’s a welcome update and makes the interface much cleaner and easier to use.

The new Nanoleaf Triangles and Mini Triangles are available on the company website. A seven-triangle ‘Smarter’ kit costs $ 279.99 CAD (same as the Shapes Hexagon Smarter kit with seven panels). The Mini Triangles Smarter Kit costs $ 149.99 and comes with five triangles. Donald Trump versus Joe Biden: Whoever wins in Ohio becomes US President